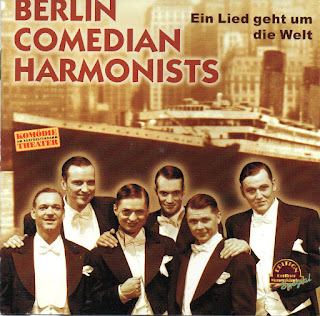 Originally created in imitation of the American The Revelers and called "The Melody Makers," the "Comedian Harmonists," a vocal quintet accompanied by a pianist, developed their own close harmony style. The five singers blended their voices so closely together that there was usually no more than an interval of a twelfth between top and bottom voices; individual singers would emerge from this close vocal texture for solos, and tenor buffo Frommermann, in particular, would contribute comical voice imitations of instruments. The ensemble's repertoire ranged from German Schlager ("Veronika, Der Lenz Ist Da," 1930) and German versions of jazz-tinged American pop songs ("Wochenend Und Sonnenschein" = "Happy Days Are Here Again," 1930) and a vocalized version of Duke Ellington's "Creole Love Call" (1933) to German folk songs ("In Einem Kühlen Grunde," 1932). The Comedian Harmonists recorded first for Odeon (1928-1929), from October 1929 to March 1935 for Electrola. 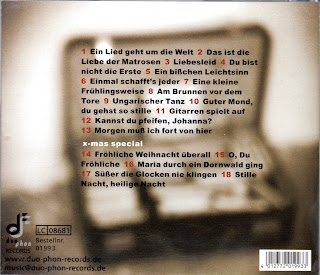