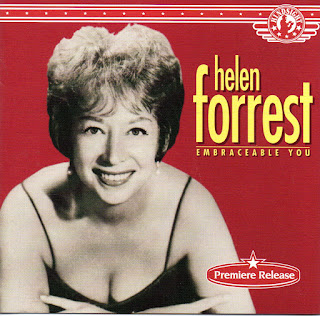 Helen Forrest (born Helen Fogel, April 12, 1917 – July 11, 1999) was an American singer of traditional pop and swing music. She served as the "girl singer" for three of the most popular big bands of the Swing Era (Artie Shaw, Benny Goodman, and Harry James), thereby earning a reputation as "the voice of the name bands."

In 1934, 17-year-old Forrest began singing for WNEW in New York. She also performed for WCBS where she was known as “Bonnie Blue” and “The Blue Lady of Song.” Eventually she found a singing job at the Madrillon Club, in Washington, D.C., where she performed for approximately two years. After seeing Forrest at the Madrillon, bandleader Artie Shaw asked her to go on tour with him; Shaw was looking for new talent when vocalist Billie Holiday decided to leave the band. Helen was hired in 1938. For a time she and Holiday were both working with Shaw's band.

Helen joined Benny Goodman in December 1939, with whom she recorded a number of celebrated songs, including the hit song "The Man I Love." Helen recorded 55 studio recordings with Goodman. After leaving Goodman, Forrest briefly recorded with Nat King Cole and Lionel Hampton.

In 1941, she approached Harry James, offering to work for him under one condition: that she be permitted to sing more than one chorus. Although James was looking for a more jazz-oriented singer, he allowed Forrest to audition. The band voted her in and she was hired. It was with the Harry James Orchestra that Helen recorded what are arguably her most popular numbers, including "I Had the Craziest Dream" in 1942, and 1941's "I Don't Want to Walk Without You." In 1942, Helen also appeared with the Harry James Band in the Hollywood film Springtime in the Rockies, starring Betty Grable.

In 1942 and 1943, Helen Forrest was voted the best female vocalist in the United States in the Down Beat poll. At the peak of her career, Helen Forrest was the most popular female singer in the United States. Because of her work with the bands of Artie Shaw, Benny Goodman, and Harry James, she is known as "the voice of the name bands" and is regarded by some as the best female vocalist of the swing era.

Over the course of her career, Helen Forrest recorded more than 500 songs. In 2001, she was posthumously inducted into the now-defunct Big Band and Jazz Hall of Fame. 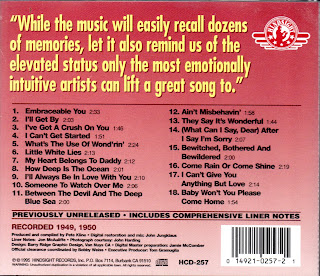