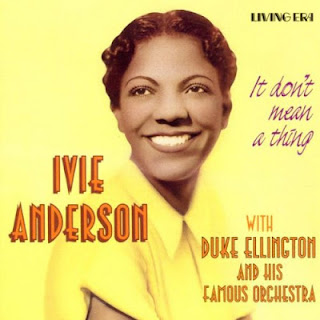 Ivie Anderson (sometimes Ivy) (July 10, 1905 – December 28, 1949) was an American jazz singer. She is best known for her performances with Duke Ellington's orchestra between 1931 and 1942. Anderson, was born in Louisiana. With a sweet, clear singing voice, she was a popular attraction with Ellington's band. Her performance of "Stormy Weather" in the movie short Bundle of Blues (1933) was only eclipsed by the later and far better-known version sung by Lena Horne in Horne's movie that was also entitled Stormy Weather (1943).

Over Ellington's long career as bandleader, his indifference toward vocalists changed with the hiring of Anderson, who was generally considered the best vocalist he ever employed. She also appeared as a singer in the Marx Brothers movie A Day at the Races (1937) and the same year in Hit Parade of 1937 (as Ivy Anderson).

Distinguished Jazz critic Nat Hentoff described Anderson as 'easily the sensitive and musical female vocalist Ellington ever had'. She 'sang with a simplicity ... so artless that she is ... remarkably neglected in ... writings about jazz.' She 'sang with a supple warmth and caressing beat that made her one of the unforgettable voices in Jazz.' He also calls her 'direct, completely unpretentious and ungimmicked'

There are many who regard Ivie Anderson as The Duke's best vocalist, and this compilation can only reinforce that belief. It covers the period of her career with Ellington, from 1932 when she first recorded with him, to 1942 when she gave up touring, and throws in for good measure her 1946 recording of Empty Bed Blues. She melded perfectly with the orchestra, establishing herself in a predominantly male clique, and was adored by musicians and audiences alike. As with all the best singers, her personality radiates from the recordings, be they exuberant up-tempo numbers like "Truckin'" or melancholy numbers like "Troubled Waters".

This very generous 26 track compilation is a joy to listen to. Recommended without reservation. 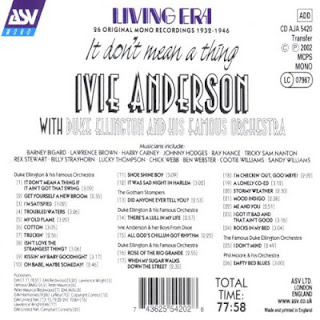 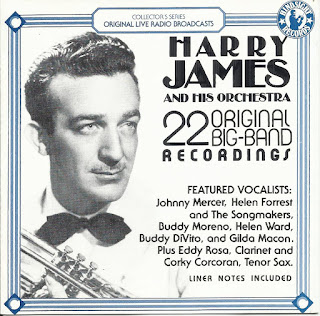 Harry James was, along with many other more well known artists of the WWII era, (i.e. Glenn Miller,Tommy Dorsey) a pioneer of swing in its rawest form. The basic foundations of his blues inspired compositions have been the baseboard of jump jivin' dance hall swing that is heard all over the radio today and emulated by modern artists such as the Stray Cats and a myriad of Rockabilly groups heretofore and everything in between.

James took this genre to the nth degree, and went all over the map with it, but never becoming blase or redundant. He had an inimitable knack for composing low-slung bluesy trumpet laden instrumentals right alongside jazz infused swinging jump jive. James' music inspired more than this wonderful musician was ever given credit for, and any lover of the swing era would be amiss to not listen to, and discover what this amazing musician gave to us.

This 22 track collection features some of his live radio big band recordings with guest vocalists. 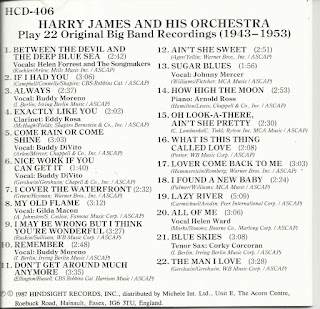 The Very Best of Louis Armstrong 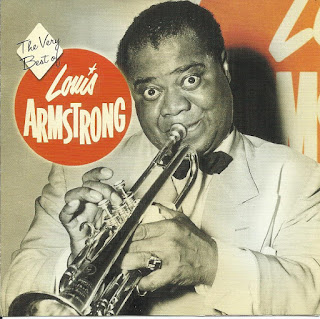 Louis Armstrong, Satchmo or Pops, was an American jazz trumpeter and singer from New Orleans, Louisiana. Coming to prominence in the 1920s as an "inventive" trumpet and cornet player, Armstrong was a foundational influence in jazz, shifting the focus of the music from collective improvisation to solo performance. With his instantly-recognizable gravelly voice, Armstrong was also an influential singer, demonstrating great dexterity as an improviser, bending the lyrics and melody of a song for expressive purposes.

Renowned for his charismatic stage presence and voice almost as much as for his trumpet-playing, Armstrong's influence extends well beyond jazz music, and by the end of his career in the 1960s, he was widely regarded as a profound influence on popular music in general.

This 40 track collection highlights some of his most memorable performances.. 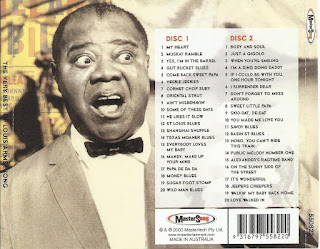